It took approximately six months over the course of 2013-2014 to write, record and produce the Divine Mercy Rosary DVD. It began with prayerful research which included St. John Paul II's Apostolic letter Rosarium Virginias Mariae, Fr. John Hardon's "A Prayer for All Times" and Fr. Michael Gaitley's Chapter on the Rosary from 33 Days To Morning Glory. The musical score comprises of keyboard and guitar parts that were written in advance of the project's conception. The various melodies came separately and no thought was given as to how they might fit together. In hindsight it seems they were "deposited" by grace in anticipation of what was to come. For example the keyboard section forming the backing track for the Menu, Intro and Closing prayers, the Glory Be and Fatima prayer happened the day the Novation Keyboard arrived. (a great Kijiji purchase from Alberta) It was the first melody written while experimenting with it once it was out of the box that day! Thankfully we made a short video of it to remember the basic progression.

The Godin 12 String Guitar riff took shape over a couple of months. This video is an early version with a fairly heavy delay effect and a speedy BPM. The final track had much less delay and the progression up the neck evolved over time. One interesting note about the recording of what became the final track is that it originally was intended as a demo track to be re-recorded later. As it turned out the "feel" of the original "demo" track could not be reproduced after many attempts and so it was left as is. This '"demo" track was recorded leisurely laying back on a couch in Chatham, Ontario to a click track for the sole purpose of laying down the accompanying keyboard track. Sometimes perceived recording perfection needs to take a back seat to an "accidental" track that captures something special.

The prayer and vocal tracks have their own unique history. We had released an audio version of the Divine Mercy Chaplet a number of years ago and Angelina's prayer tracks come from that recording. They were recorded in the basement of our Victorian home in Ottawa which features an almost "monastery" look and feel because of the old large foundation stones. The Creed, Announcement of the Mysteries, Fatima and Closing Prayers were recorded in our Home Studio in the front room on the right as you look at this image. Home Studios these days can produce outstanding results greatly reducing the expense incurred in years gone by. That being said, probably one of the greatest challenges is knowing and accepting when to "abandon" the mix and considering it finished and ready to go! The audio for the Divine Mercy Rosary DVD was recorded, mixed and mastered using Apple's Pro-Logic X with added plugins from BBE Sound. Meticulous care was taken especially with the spoken tracks. This involved hundreds of edits to remove miscellaneous or unwanted sounds which would take away from a clear, clean and crisp recording to minimize any distractions to the listener. Similar edits were also implemented on the guitar and keyboard tracks where necessary. The above image is a screen shot of a few audio tracks. Notice the five blocks of audio in the bottom row? These are guitar tracks with edits shown in yellow. In the image below the BBE Sonic Sweet Plugins, Pro-Logic Reverb and EQ are highlighted. Hours fly by with seemingly endless tweaking to get things sounding just right. The initial inspiration for the video aspect of the project was birthed in part by the popularity of our Divine Mercy Chaplet YouTube video. This led to the concept of producing videos of the Mysteries of the Rosary that would be deeply engaging by combining imagery with purposefully and prayerfully chosen accompanying texts. In the beginning there was no real sense of how long it would take to put it all together. In fact it was unknown if enough suitable images would be available. Advanced search in Google Images became the DVD's best friend! There turned out to be many high quality license free images that could be utilized to "tell the story" of each Mystery along with the images needed for the intro and closing prayers. Thousands of images were viewed, hundreds were considered and finally the images chosen began to fall into place and the Mysteries were created decade by decade. Each image was first imported onto a black background in Powerpoint, the chosen text was added and then a screenshot taken to produce the final slide to be inserted into iMovie. It is probably fair to say that with revisions and edits the whole project was overhauled about two and a half times.

In iMovie the audio tracks were dropped in and then the work of creating videos for each of the four Mysteries began in earnest. As mentioned slides would be imported one by one. Panning and the cropping of each slide was executed while selecting sometimes to the tenth of a second timing for each slide and transition. Care was taken to make sure that all transitions felt natural with no overlapping of text from one slide to another. During the creation of the Sorrowful Mysteries an unexpected and providential event occurred as documented in the article about the story behind the Divine Mercy Rosary DVD . We had been praying with a friend the Mystery when we arrived at the videos current place of completion which happened to be the first slide of the fifth decade. Upon pressing pause to continue our prayers the image on our TV screen was frozen between the transition of our Divine Mercy Painting image (used for the Fatima Prayer) and the first slide of the fifth decade which is the famous and very moving Crucifixion scene by Matthias Grunewald. This pivotal event not only became the cover but also led to the naming of the Divine Mercy Rosary. At this point inquiries were made to various production facilities to produce the final DVD's. Disc Makers in the US was chosen and the process of designing the Cover Jacket and Disc Label was initiated. InDesign and Photoshop were used for this task. The learning curve was steep but with God's grace suitable designs finally began to take shape including images from the DVD and quotes about the Rosary. Another aspect of DVD production is Authoring and producing a Master. This was contracted out to Precision in Ottawa, Canada. This involved the submission of the large video files of the Mysteries (over 16GB)  plus the Menu design shown below. Precision did a great job of compressing the videos in order to be replicated onto DVD 9's by Discmakers.  Authoring produced a finished Menu featuring executable links to the various videos by hovering over the images representing each of the Mysteries. The Master for Replication was ready for pick up on March 25th, 2014...The Feast of the Annunciation! It was sent to Discmakers and we then waited with anticipation for delivery of the finished product. They arrived on April 11th in time for our official release date of Divine Mercy Sunday April 27th, 2014. (also the Canonization date set for now Saint John Paul II) 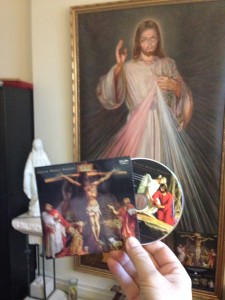 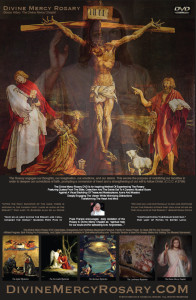 The image below was taken at Divine Infant Parish in Ottawa where we released the DVD on Divine Mercy Sunday. A 1st Classic Relic from St. John Paul II was present for veneration. 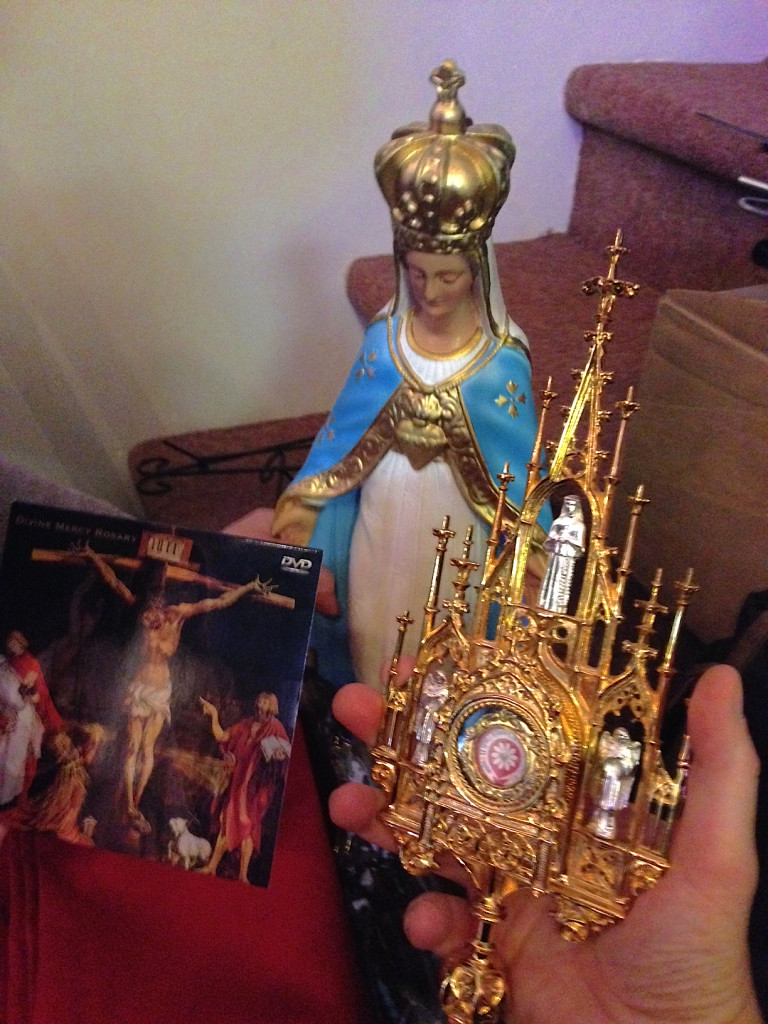